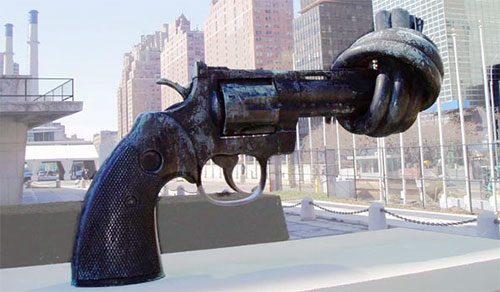 Gun violence is becoming an American tradition.  The mass shooting in Las Vegas is being quickly driven to the back of our minds as our nation mourns churchgoers, gunned down as they worshiped in Sutherland Springs, TX.  Time and again we wonder how this could happen, what we could have done to prevent it, and how we can be better prepared in the future.

Violence does not occur in a vacuum.  These shooters, overwhelmingly men, have grown up in a culture that teaches them that violence is a source of power.  We teach young men and boys that toughness is a virtue.  We teach them not to cry, not to show any emotion other than anger.  We teach them that they prove their masculinity with their fists.  We teach them this and then wonder how they grow up to be men who live their lives by these principles.

When compassion, empathy, and respect aren’t nurtured, we grow our children into broken adults.  Our children, full of hope and life and opportunity, grow up to be adults who gain control with the force of a fist or down the barrel of a gun.  Our children grow up to abuse their spouses and their children.  Many end up turning that anger and need for control on an already-hurting world.

From the day our sons and daughters and our children are born, we indoctrinate them into a culture of fear, power, and control.  It is no surprise that the traits that create domestic abusers allow them to go on to become mass shooters.  Upwards of fifty per cent of mass shooters have a history of violence against their families.  We MUST address this fact if we are ever to address the true roots of gun violence in our country.

We have a gun problem in a country, but we also have a problem with domestic violence.  We need to be aware of the dangers that abusers pose, both to their victims and to society at large.  We need to work harder to keep guns out of the hands of abusers and teach law enforcement and the justice system to recognize the signs of escalating violence.  If we are ever to make progress in ending mass shootings, we must begin by taking domestic violence seriously.

Domestic violence shelters are key advocates in this fight and keenly aware of the dangers of abusers.  We know the struggles our victims face.  We know the keys to preventing violence in the first place.  We advocate for the needs of survivors and the right to a safer future.  We stand with all those calling for an end to gun violence and we ask them to stand with us for survivors of domestic violence.  We honor all those who have been killed by those who were supposed to love them and we will not give up on the journey to end both domestic and gun violence in our community, in our country, and in our world.

If you are worried about domestic violence and want to speak with a trained advocate, call our 24-hour hotline at 815-756-5228.